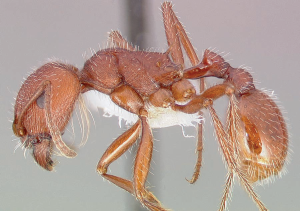 Worker ants are 1/4 to 1/2-inch long and red to dark brown. They have square heads and no spines on the body.

There are 22 species of harvester ants in the United States with most occurring in the west. Worker harvester ants are often sold as inhabitants of ant farms.

Life Cycle: Winged males and females swarm, pair and mate. Males soon die and females seek a suitable nesting site. After dropping her wings, the queen ant digs a burrow and produces a few eggs. Larvae hatch from eggs and developed through several stages (instars). Larvae are white and legless, shaped like a crookneck squash with a small distinct head. Pupation occurs within a cocoon. Worker ants produced by the queen ant begin caring for other developing ants, enlarge the nest and forage for food.

Habitat, Food Source(s), Damage: Mouthparts are for chewing. Red harvester ant foragers collect seeds and store them in their nests. In addition to seeds, dead insects are also collected for food. Nests occur in open areas. Often there is no vegetation within a 3 to 6 feet circular around the central opening of their colony and along foraging trails radiating from the colony. Heavy infestations in agriculture may reduce yield but colonies are usually widely separated. They do not invade homes or structures.

Pest Status: Worker ants can bite and produce a painful sting but are generally reluctant to sting. Effects of the stings can spread along lymph channels and may be medically serious; worker ants remove vegetation in circular areas or craters around nests. Harvester ant workers are commonly sold for ant farms.