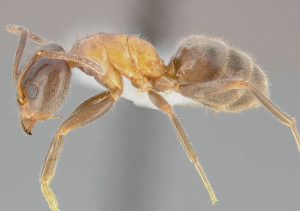 One unusual insect that is occasionally seen running around open areas in the yard during July, August, and September is the velvet ant. Velvet ants look like large hairy ants, but they are actually wasps. They differ from ants in having only a slight constriction between the thorax and abdomen and having straight rather than elbowed antennae. They may be seen in lawns or pastures, or occasionally wandering into buildings. These solitary wasps, as the name implies, are densely covered with short hair.

The males have two pairs of transparent black wings. The females are wingless, and are sometimes confused with ants. Ants, however, have elbowed antennae, and a “hump” in the constriction between the thorax and abdomen. Velvet ants are brightly colored. They are shades of yellow and brown or red and black. Velvet ants are not aggressive and will try to escape when encountered, but females have a very painful sting if handled. Females use a long, needle-like stinger concealed at the tip of the abdomen. Many of the velvet ants can produce a squeaking sound when disturbed.

Adult velvet ants feed on nectar and water. The immature stages are external parasites of bees and wasps that nest in the ground. A few species parasitize some flies and beetles. Consequently, there are no identifiable nests to treat. Velvet ants prefer pastures and fields with sandy soil where their prey are most likely to be found. There is no effective control measure for them. If they are particularly abundant in an area, it may be helpful in the long run to overseed to get a better grass cover. This would discourage the ground nesting bees and wasps on which velvet ants feed. Because velvet ants are uncommon and do not cause any damage, no chemical control is recommended.